You're right. fv version 3.0-17 gave me a segmentation violation, but gui's are not needed here anyway. This can be checked using GDL and the IDL astro library FITS tools as follows.

Data/software files: Install: Start gdl and copy/paste the GDL commands below, where 'tod.fits' is the name of your TOD file:

The attitude data are recorded 25.6 ms later than the differential data.

For a few TOD files that I randomly selected, I get 25.6000 ms offset, which is enough to make your statement very credible.

For a more fundamental check (rather than doing this for all data files), WMAP engineers should in principle be able to check the code that generates the timestamps in the "Science Data Table" and explain how this relates to the spacecraft attitude quaternions in the "Meta Data Table". They should be able to find the half-individual-observation-offset in that code. The alternative is that WMAP people point us to the specific section in one of the WMAP technical papers where the quaternion versus science frame 25.6 ms offset has already been explained. I searched and failed to find it.

Boud Roukema wrote:I searched and failed to find it.

The WMAP team has updated their Explanatory Supplement paper just a few hours ago (20100405094148-04'00'): http://lambda.gsfc.nasa.gov/product/map ... lement.pdf
On page 117 (125th page in file) in the Meta Data Table section, "Attitude data are transmitted from the spacecraft every second. The thirty quaternions corresponding to the science data frames have been interpolated to the start time of the corresponding science frame." Here, "interpolated" presumably means interpolation between successive seconds when attitude data are sent from the spacecraft to Earth. This is not the issue we're interested in here.

A few sentences later, "The rapidly-varying quaternions have been specifically interpolated to the start time of each 1.536 sec science frame." This is the interpolation we're interested in. This says "start time", without mentioning the 25.6 ms offset.

On the following page, in the Science Data Table section, again nothing is stated about the 25.6 ms offset.

by Tom Crawford
Sorry for chiming in late, but unless I misunderstand the situation completely, there are a couple of very simple tests that could rule out this effect. If your pointing data and your detector data are offset in time, then where a source ends up in your sky map depends on the direction of the scan(s) used to make that sky map. If you made a map from only "left"-scanning data and another map from only "right"-scanning data, sources would show up in different places in the two maps. The offset between the two maps in the case of Liu et al.'s model would be 14 arcminutes. If you ignored the offset and added the two maps together, you'd get two copies of every source --- or, if your beams were on the same scale as the offset, you'd get very smeared-out sources.

So, there are two families of tests that can easily check for this effect:

1) Beam tests. Is there evidence of many-arcminute-scale smearing of WMAP beams? I think the answer to this is a resounding "no". The WMAP beams are estimated from in-flight measurements of Jupiter, and they use the same pointing data as the CMB measurements do, so they should suffer the same offsets. There is no way a 7' or 14' beam smearing would have gone undetected, particularly in W band, where the beam scale is only 12'. (Page et al. (2003) say right in the abstract that the WMAP beams "closely follow the prelaunch expectations.") If the WMAP team somehow managed to analyze the Jupiter data differently from the CMB data, such that the Jupiter beams are correct, then we'd see a discrepancy between the assumed beams and the real (smeared) beams in the CMB data, and the high-ell WMAP CMB power spectrum would not agree so well with the small-scale experiments (ACBAR, QUaD, SPT, ACT). (Thanks to Akito Kusaka for pointing that out.)

2) Source offset tests --- i.e., do the test described above of making sky maps with data in only one scan direction at a time, and compare the maps. Even easier: Find some WMAP TOD where Jupiter was observed from one scan direction (say, increasing R.A. and constant dec) and some other WMAP TOD where Jupiter was observed from the opposite scan angle (in this case, decreasing R.A. and constant dec). Plot the detector timestreams vs. sky coordinate (in this case R.A.). If the offset claimed by Liu et al. is there, you should see two Jupiters, separated by 14'.

Boud Roukema wrote:As stated in the paper, the two halves of the plot appear to be very
linear, with slope [tex]14.6\pm 0.2 \mu K [/tex] / full_offset, and the minimum
appears to occur very sharply at the point that Liu and Li used. It
seems to be stretching the limits of credibility that Liu and Li
happened by chance to find a very sharp optimal point for
anti-correlating the cosmic quadrupole signal.

Liu & Li seem to have subtracted off the map at the offset they hypothesise to be correct, rather than subtract off the rms at that offset. So the sharp minimum here does not mean what I thought it did. The question of where the minimum quadrupole lies and whether or not this occurs close to the offset (or one of the two offsets, -25.6 and -51.2 ms relative to the official WMAP offset) proposed by LL remains an open question.

Tom Crawford wrote:Sorry for chiming in late, but unless I misunderstand the situation completely, there are a couple of very simple tests that could rule out this effect.

Tom: nice idea! The effect is not as obvious as you guessed, but after
a bit of work, it does show that an error did not occur in putting
together the calibrated TOD into maps: 1004.4506. A timing error
at this step is rejected at high significance.

What remains possible is that the time offset occurred during the calibration
step - which uses the dipole. Of course, this would require that while the
people who put together the calibrated TOD correctly ignored the stated time
offset, the people who did the calibration incorrectly assumed that the stated
time offset or a closely related offset was correct. It also reqiures that the
people who did the calibration either didn't notice that the 25.6 ms offset
was not mentioned in the Explanatory Supplement, or noticed and forgot
for the past 7 years to ask someone to update it. Or the software read
in the time from the meta data and nobody noticed it was offset from the science
data times. IMHO it's still credible that an error occurred and nobody noticed
(until Liu et al. 1003.1073...).

Any neat ideas on how to test a timing offset error during the
calibration? There's probably no clean way to do this without preparing
a pipeline for converting uncalibrated TOD to calibrated TOD, and even
after doing that correctly, it's not obvious to me that it would
be easy to reject either hypothesis (no timing error, or timing error
of -25.6 or -51.2 or -76.8 ms). 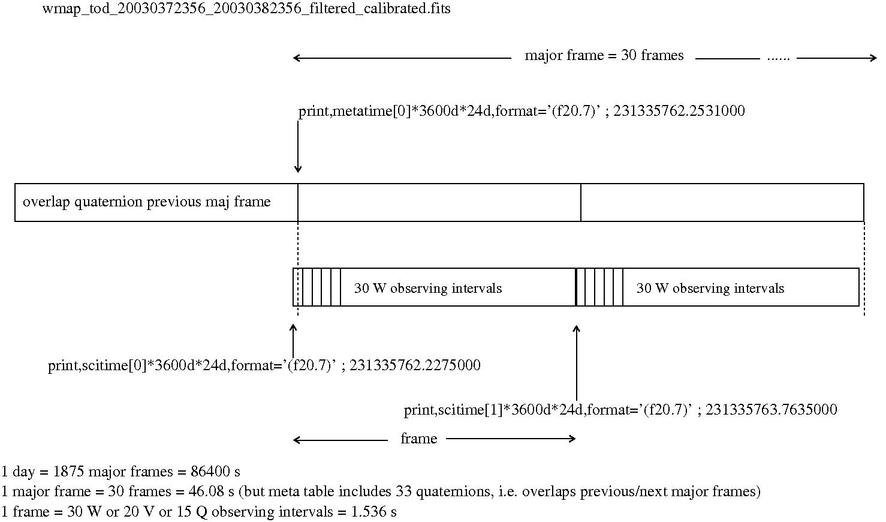