An interesting paper by Easson, Frampton and Smoot appeared recently with the title “Entropic Accelerating Universe”(1002.4278). As the title suggests, the paper tries to explain dark energy as being a manifestation of the holographic principle, in the form of an entropic force (borrowing some conceptual ideas from Verlinde’s recent paper 1001.0785). This is a big claim, which, if true, would constitute a stunning advance in our understanding of the universe. Hence the paper deserves a careful examination. Here, I would like to point out that the proposed “entropic” modification of Einstein’s equations immediately leads to inconsistent results when applied to the epochs of radiation and matter domination.
The authors propose to modify the acceleration equation by adding, largely on dimensional grounds, the term [tex]H^2[/tex] to the right hand side, i.e. they propose to consider the equation [tex]\frac{\ddot{a}}{a}=-\frac{4\pi G}{3}(\rho + 3P)+H^2[/tex] (they also consider a slightly different modification, which leads to the same inconsistencies). A puzzling feature is that this modification is supposed to arise from boundary terms, so that one would expect a factor of [tex]\delta(y)[/tex] with [tex]y[/tex] denoting the position of the holographic screen, but let’s go with the modification as written above for now. The new equation should hold true everywhere and at all times. During both the epochs of radiation and matter domination, the dominant energy densities scale as [tex]t^{-2},[/tex] while the Hubble parameter scales as [tex]t^{-1}.[/tex] Hence the terms on the right hand side of the new acceleration equation scale in exactly the same way, and hence the universe must either always be accelerating or never. Certainly, a transition from deceleration to acceleration is not allowed, but this was precisely the observation that the paper set out to explain! What’s more, by using the (unmodified) Friedmann equation during matter domination [tex]3H^2=8\pi G \rho_m[/tex] one would conclude that [tex]\frac{\ddot{a}}{a}=+\frac{4\pi G}{3}\rho_m,[/tex] i.e. that the universe should have accelerated during matter domination, in blatant contradiction with observations. Dark energy won’t yield its mysteries quite so quickly!
Top

Actually, the transition from non-accelerating to accelerating occurs
at slightly higher redshift than the corresponding LCDM model (with \Omega_m = .27) and more or less around z = .5 for the model including the [tex]\dot{H}[/tex] term. Perhaps we'll include a plot of this in a future work or revision.
Top

Dear Damien,
The inclusion of the [tex]\dot{H}[/tex] term does not change my argument: all terms on the right hand side of the acceleration equation still scale as [tex]t^{-2}[/tex] during the epoch of matter domination (including the new terms that are supposed to mimic dark energy), so that the universe either always accelerates or never, depending on how you choose the coefficients of your new terms. There is nothing in the model that can revert from deceleration to acceleration, and therefore nothing that gets you out of the matter epoch into a dark energy epoch, as far as I can see.
Best, Jean-Luc
Top

To understand this better it is useful to re-write the acceleration equation:
[tex]\frac{\ddot a}{ a} = - \frac{4 \pi G}{ 3} (\rho + 3 P) + H^2[/tex] by using the equality [tex]\frac{\ddot a}{a} = H^2 + \dot H[/tex] to turn the equation into a first order equation for \dot H and solving the system that way (along with the equation [tex]\dot a = H a[/tex]). The same method obviously applies to the second model involving the \dot H term. After scaling things in the usual way, and setting [tex]\Omega_m = .27[/tex] and solving the system you will find the natural transition from a non-accelerating phase to an accelerating phase. In the attached figure, I plot the "deceleration parameter" where you can clearly see the transition (for our model given by Eq 13). I did not bother to include this in our paper since clearly we would not have been able to fit the supernova data as well as we can (see Fig 1 in the paper) without having the transition from non-acceleration to acceleration. The jerk occurs very close to a redshift of z =.5 .

In addition, I think your concern stems from using the traditional Friedmann equation. In our model (as with any modified gravity model) the G_{00} Einstein equation (the generalized Friedmann equation) is non-standard. So [tex]H^2 = \frac{8 \pi G}{3} \rho[/tex] does not apply in our model.

The inability of many modified gravity models to successfully make the transition from a non-accelerating phase to an accelerating phase is an interesting one (for example, the case we studied in astro-ph/0506392); however, the entropic model does not suffer from this problem.

I hope this clears things up. 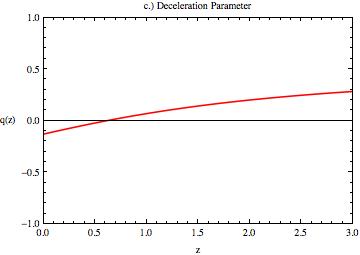 Dear Damien,
I am still not convinced. In my arguments above, I assumed the standard time dependence of the energy density of matter, which, as you point out, might not apply exactly because the Friedmann equation should also be modified. But then, in order to really know what’s going on, I need a full set of equations, including the equation of continuity and the Friedmann equation. Since you propose to modify [tex]G_{\mu \nu},[/tex] but not [tex]T_{\mu \nu},[/tex] I assume that you are keeping the equation of continuity [tex]\dot{\rho} + 3H (\rho + P) =0[/tex] since it follows from the conservation of [tex]T_{\mu\nu}.[/tex] In the same vein, the Friedmann equation should read [tex]X=\rho[/tex] where [tex]X[/tex] is a quantity to be determined, but which must depend on the metric only. Taking a time derivative, we get [tex]\dot{X}=\dot\rho=-3H(\rho +P),[/tex] which we want to be consistent with the modified acceleration equation [tex]\dot{H}=-\frac{1}{6}(\rho + 3P).[/tex] For ordinary matter [tex]P_m=0[/tex], which, by combining the previous 2 equations, leads to [tex]\dot{X}=18H\dot{H}[/tex] and thus [tex]X=9H^2.[/tex] On the other hand, for radiation we have [tex]P_r=\frac{1}{3}\rho_r,[/tex] which leads to [tex]\dot{H}=-\frac{2}{3}\rho_r[/tex] and thus to [tex]X=6H^2,[/tex] i.e. to a different [tex]G_{00}[/tex] and a different Friedmann equation. The form of the Friedmann equation should of course not depend on the content of the universe, which confirms to me that your proposed ad hoc modification of Einstein’s equations is inconsistent as it stands, and at this point I rest my case.
Best wishes,
Jean-Luc
Top

I really don't have this much time to discuss topics on blogs and forums. But just quickly... you were incorrect in assuming the model fails to make the transition from non-acceleration to acceleration. Furthermore, in your latest argument you are, in the general case, incorrect in assuming the modified Friedmann equation has to take the form [tex]X = \rho[/tex] where X is a quantity to be determined, but which must depend on the metric only. There are many examples of modified gravity where this is not the case, for example, brane worlds or loop quantum gravity models where the Friedmann equation picks up an extra [tex]\rho^2[/tex] correction. Finally, I want to point out that virtually all models of modified gravity and models which modify Einstein's GR end up being ruled out for various reasons. The point of our paper was much broader than simply to produce the specific model you are concerned with. The model was a simple example that captures some of the principles we discussed in the paper.

As I've said, due to having more important things to do, I won't be able to spend more time discussing this on CosmoCoffee. But I'd be happy to discuss more in person at Santa Barbara next month assuming you will be there.

Moreover, it still suffers from the coincidence problem, as Damien has to fine-tune the integration constant Omega_m = 0.27, for the acceleration to start recently.
Top

Thanks for the post.
The Friedmann equation is coming, and as has been mentioned, that should allow us to put firm constraints on the model.

We have to think a little more about the coincidence problem...